The purpose of a house system is to create a collegiate, but competitive, system with in school in which students can be proud and learn the values of being supportive to each other. Healthy competition will set students up with the skills required for later life, for example learning empathy and tenacity.

“Competition helps kids learn that it is not always the best or the brightest who are successful, but rather those that work hard and stick with it” – Dr Timothy Gunn, Psy.D

Our house system encompasses the importance of the ‘Growth Mindset’ and ‘Them and Us’ approaches, giving students multiple opportunities to succeed.

Ultimately, students will be competing for the House Cup. This will be presented at the end of the academic year and will result in the cup being decorated in the house colours and the house colours being prominently displayed around the school.

To win the House Cup there will be multiple smaller cups, which will change depending on the month/time of the competition – this will add points for the house:

The Service Cup – Every half term the house that has made the most money for charity will win the Service Cup, which they can proudly display, and the overall winning house will be awarded 500pts for their house. Points can also be awarded for acts of kindness and charity events that support the community but do not necessarily raise money.

The Sports Cup – Every inter-house competition will result in the Sports Cup being awarded with 500pts for the overall house winner.

The Sports Day Cup – The PE Department record these results.

The Arts Cup – For any competition involving the arts including inter-house debates, overall winning house is awarded 500pts.

If a house holds more than one cup they get a x1.25 multipliers. Merits will no longer contribute to house points, these will be two discrete systems.

Named for Marie Curie, Polish scientist, most famous for her discovery of radiation and first female Nobel Prize winner.

Named for Gustav Holst, English composer and teacher best known for his composition The Planets

Named for Albert Einstein, German Physicist, most famous for his theories on relativity and the photoelectric effect, winner of two Nobel prizes.

Named for David Livingstone, Scottish medical missionary and explorer, most famous for his exploration of central Africa

Named for Guglielmo Marconi, Italian inventor, most famous for the invention of the radio.

Ernest Rutherford, New Zealand-born British Physicist, most famous for the discovery of the nucleus of an atom

Edward Vickers, British Engineer, most famous for founding an engineering company that eventually went on to become BAE 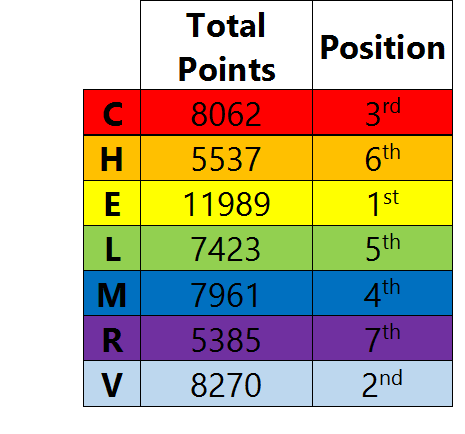