Students were asked to bring in either a completed shoebox or bring in items that could go in a shoebox and make shoeboxes as a form group.  Students won valuable points for their house which went towards winning the Service Cup.  The year groups who brought in the most boxes also won a prize.  Year 9 won with a total of 63 boxes and Einstein won with a total of 51 boxes.

Ms Woolley who organised the appeal at the school said, “We hit our goal of over 200 shoeboxes with a grand total of 219. A record number!  Thank you to everyone who donated.”

These were collected by the foundation and will be sent to St Lucia for the Jermain Defoe Foundation shoebox appeal.

The house totals were as follows and will go towards this half term’s service cup: 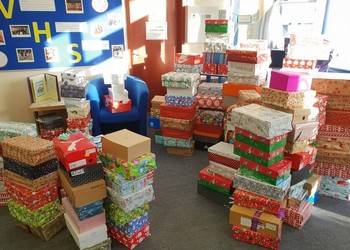 The year group totals were:

Ms Woolley said, "After learning about how the Jermain Defoe foundation supports and helps vulnerable young people in St Lucia and Dominica such as in the Holy Trinity Children’s home, Chelmer Valley students have gone above and beyond to make a difference by providing 219 shoeboxes of Christmas goodies, I couldn’t be more proud!"